Hey guys just wanted to do another update. First off the Prizes have been figured out.  I wanted to spread the love as much as I could and have made it so half of your bracket will get a prize. They're after the break!
Read more »
Posted by elphilo at 1:11 PM No comments:

Hey all just wanted to post a quick update. We're going to follow the changes that the NOVA Open are doing with their third detachment. So you're allowed to take a third detachment just that it cannot be CAD-Like. Here's a quick run down:


Also remember with the release of the new Imperial Knights codex, they have essentially been banned from the NOVA Open format and will be treated the same way at the RTT this weekend.

If you have any questions please let me know. You can reach me at elphilo40k at gmail dot com.

Posted by elphilo at 6:11 PM No comments:

Week 1 has started! If you did not receive an email with your bracket please let me know!

So that's it! Sign ups are closed and we have a total of 32 people! WOW! I can't thank you enough for wanting to participate in the league!

I hope to have brackets out today and you'll be getting an email with more details on how and where to input your scores when I finish making the brackets.

If it turns out you can't get a hold of someone or they flake out, please let me know. My email address is elphlo40k at gmail dot com.

Remember you have two weeks to do your games or it results in a forfeit! But like I said earlier if you don't hear back from someone in a reasonable amount of time please contact me!

Also just a little quick something cool that I made, a map of all the participants in the league. Now I don't have exact addresses only cities that people signed up for, so when you see multiple pins close to each other, that's not where they live. I just moved them so I can see how many are in one area easier.

Oh and you can see the brackets too ;) 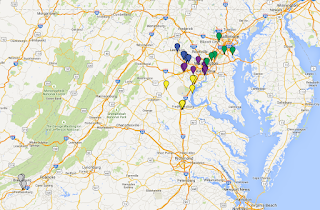 Posted by elphilo at 1:04 PM No comments:

Today, Saturday May 16th, is the last days for sign ups! You can either sign up in store or please email me elphilo40k at gmail dot com for online sign up instructions!

Posted by elphilo at 7:48 AM No comments:

Hey all I just wanted to put a post up that there is only 1 week remaining for sign ups! So tell your friends! Remember you can sign up in the store or get instructions for signing up online by emailing me at elphilo40k at gmail dot com.

Also I wanted to inform everyone of some changes that NOVA Open is doing and we're going to follow suit.

D shots originating from greater than 12" away treat all "6" results as "5" results instead.
D weapons always inflict only D3 Wounds or Hull Points (even on a "6" result). These also still do their penetrating roll on the vehicle damage table.

The next change is detachments. Originally the NOVA allowed 2 detachments of anytype meaning you can double CAD. Now they've changed it. You can still take the double CAD but you're now open to a third detachment. Though the third detachment does have some restrictions -

Also please remember that if you take a Combi-Detachment (so far, as of this post, there are only 3, the Necron Decurion Detachment, the Craftworld Warhost from the Eldar Codex and the Blood Host Detachment from the Khrone Daemonkin Codex) then that counts as your two CAD-like detachments you can take. That way you're allowed to take that third detachment in case you want to take another formation or say an assassin.

If you have ANY questions about any of the detachment rules please DON'T hesitate to ask me. You can contact me via email, elphilo40k at gmail dot com.

The third and final update for this post is just an FYI for players. With the release of the new Imperial Knight Codex they have been changed into Super Heavy Lords of War. Meaning they are now banned in the NOVA Open format, so they're going to be banned in this league as well.

Anyway I think that covers it. If you've got any questions at all please don't hesitate to contact me!
Posted by elphilo at 5:20 PM No comments:

Hey all its that time again, its time to post the May Huzzah Hobbies RTT! And yes we still are an ITC event! For more information about the ITC click here!

More information after the break!

Just wanted to say that there is only 2 weeks left to sign up! So what are you waiting for!??!!? Sign up in the store or by email me at elphilo40k at gmail dot com for instructions!
Posted by elphilo at 9:29 AM No comments: