First off the event was great and much fun was had by all! I highly suggest this tournament if you can make it! My games after the break!

I did pretty well overall. Technically I went 2-3-1, but since ToF doesn't accept ties but the BAO missions do, I apparently got the "win" for my tie and ToF reports me as 3-3. Regardless I didn't do too shabby. This was a long weekend so these recaps aren't going to be too in depth.

My first game was versus none other than Adepticon winner Nick Nanavati. He brought a Tyranids and (old) Dark Eldar list. The jist was he would throw down a Webway Portal and then have his Nids come through it. He didn't do that against me because he was spending most of his time with his FMCs avoiding my Thunderwolves from "glorious combat." And since I only had two stalkers, yes I was putting wounds on his harpies/crones, he wasn't failing grounding checks. He also got the infiltrate Warlord trait, so he outflanked his Hive Tyrants to take out my stalkers. The crucial moment in the game is he unloaded on a somewhat depleted command squad, his thinking is he would kill a dude or two and then be in a better spot. What ended up happening is he killed the ENTIRE command squad. Then his Mawlock and my Chapter Master fought and took each other out.

My second game was versus John Sterling. You might know that name because he won NOVA Open's Capital Palette Best in Show with this entry: 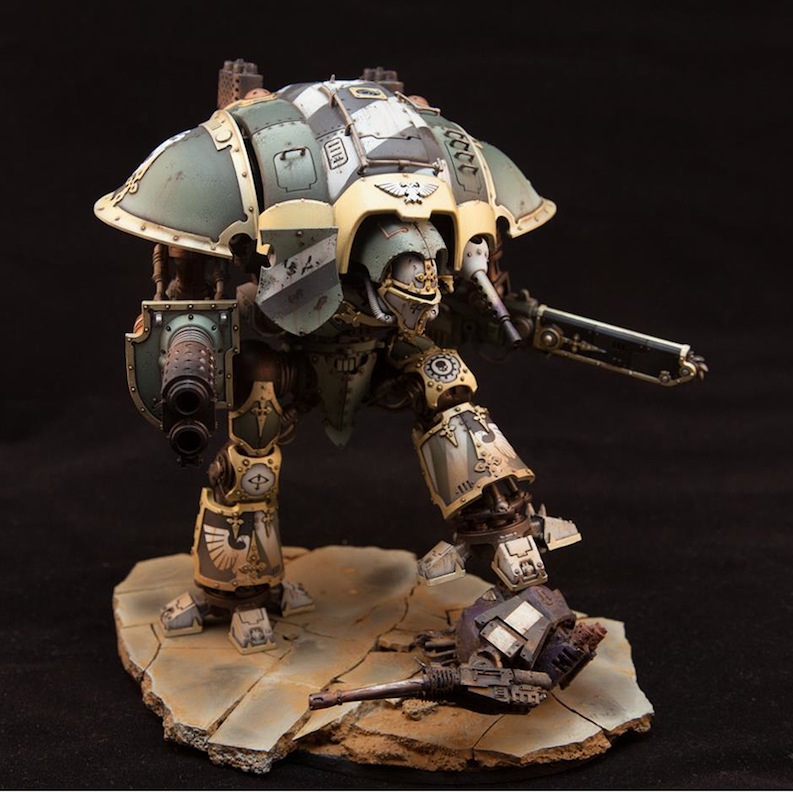 And yes, this bad boy was in his army list! John played a SM/Adamantium Lance list. The best part of the game was when he came to the table to introduce himself. He said he was only here for the painting aspect and then handed me his list. When I noticed the lance I looked at him and said are you sure? He laughed and said he didn't realize how good the Lance Formation was until this event. John is probably the only person who would say this and be it would be 100% truth. The highlights of this game is, I broke off Khan to deal with some marines and his chapter master in my backfield to help "forge the narrative" we were doing. He ended up dying on overwatch. I knew it was dumb but figured screw it, I need to make big plays at this point to win. Another one was the Thunderwolves unable to take down a knight in one round of combat. Making them take a second round and getting more wounds peppered on the squad. By the time I killed two of his three knights I only had one Iron Priest, the Wolf Priest and a Storm Shield Thunderwolf. They all had one wound left. At that point I was out of steam and we called it.

Loss 9-1. Turns out I was John's only win this entire weekend. Yay!

My next game was versus Arjun Miller. He was playing Eldar/Tau and brought an interesting list. Eldrad, Farseer, Warlock, 20 man guardian blob, two 5 man dire avenger squads in wave serpents, one of the heavy support vehicles that's a wave serpent chassis (I can't remember for the life of me which one he brought), Commander with Plasma and missile pod, 12 man firewarrior squad, riptide, and pathfinders. This was relic so his plan was to invis the guardian squad and just hold the relic. However I rolled higher for determining first turn so I decided to take it. I scouted the command squad with chapter master onto the relic and then scouted up the thunderwolves with Khan in there. I hopped he didn't seize. He got a 5, close! The highlight of the game was this, the middle line of sight blocker was a giant H. I picked up the relic did some shots on a wave serpent with the command squad. Next turn he moved his blob up and shot the command squad doing no wounds. Then I moved past the middle line of the H and turbo boosted even more. Next he moved over the middle line of the H shot them some more and did a wound to the chapter master. I then moved/turbo boosted the command squad back towards my deployment (hammer and anvil btw) and moved up my stalkers to be blockers for the command squad. My plan was to then tank shock the guard squad with the stalkers to make it so he couldn't "claim" the relic because he was Objective Secured while my bikers were not. Meanwhile my thunderwolves broke off, sending the iron priests at the heavy support skimmer, thunderwolves at his remaining wave serpent and then Khan and Wolf Priest into his pathfinder squad. At this point he decided to call it, it was apparent I was just cleaning up. Luckily he got first blood so he managed to get a point!

This game was against Robert Raciti. He was telling me how he was new to the game, 3 months. Then handed me his list. He was playing pure Dark Angels. As a Dark Angel's fanatic myself I knew this was going to be bad. This was a quick game, no real highlights honestly. I just felt really bad tabling him. At the end of the game I told him that I love DA so I understand him liking the look and feel of the Son's of the Lion, but if he wanted to be more competitive he should probably use the DA models but play with the Space Marines book. Such a shame as DA have a rich history and a great aesthetic! Ugh my boys in Green need a good book. One day we shall have our time in the sun!

This game was versus Simon Leen. I first met Simon at this year's NOVA Trios. We were both ringers for the Trios and played on the Ringer's team. Simon is a great guy and we had a fun game. He played his Sister's of battle army and, as always, he's really good with them (Simon went on to play Neil Gilstrap and his Tau to win our bracket btw). Highlights of this battle are my Thunderwolves (including 2 Iron Priests) unable to do 4 hull points to destroy a land raider. Simon shooting my Thunderwolves and killing one of them, then charging through difficult terrain rolling a 4, which would have been more than enough had that one Thunderwolf cav lived. Those were pretty much the memorable parts.

Loss 9-1. Though the final score doesn't look like it, it was a really close game. I think we had a combined 15 models left on the table!

My last game for the weekend was versus Chip from Torrent of Fire. Chip was playing with 4 squads of Dire Avengers in wave serpents, 2 units of six man Swooping Hawks, 3 Storm Wolfs, a wolf guard battle leader and then 2 units of a single servitor. I played a similar list of Chip's with a similar list of mine a few weeks earlier at a Torrent of Fire fight night. It didn't turn out well for me. I thought the same thing would happen, but it didn't. It actually turned out to be a really close game. With Chip able to pull out a primary win on turn 7. Had the game actually ended on turn 5 or 6 I would have won the entire game. Turn 7 meant we tied.

I really did enjoy myself at Battle for Salvation and do plan on coming back next year. While it was a hell of a drive up and back (about 5 hours one way) it was well worth it. Some things I learned. Don't stay at the Best Western they tell you to. Its kind of a shit hole and small. Luckily our 3rd in the room had to drop out last second, because had he not the person who was willing to sleep on the floor would have had to sleep leaning up against the wall, that's how little space there was. As to the event overall it was a blast, the only thing I really disliked was the BAO missions. The modified maelstrom missions are a good try, but they're too random still. I know there were a few of my games (Simon's game rings a bell actually) had I not rolled the maelstrom missions I rolled in turn 2/3 I would have been able to win/contest the secondaries and then relied on the book bonus points and primary to actually win. Because of how the missions are scored First Blood is a bigger advantage than it already is. If you were to get first blood and then win Primary there is almost no way for a person to win off the secondary and the bonus points. Also if you go first, you're almost 100% likely to not win the modified maelstrom because they are scored at the end of a turn. Meaning the second player can react and deny the first player's points and score their own. I know in my game with Chip, he rolled a bad maelstrom on turn 2 and just gave it up entirely.

Anyway that's it! Sorry for lack of pictures, I completely forgot about it. Until next time, have fun and be safe!